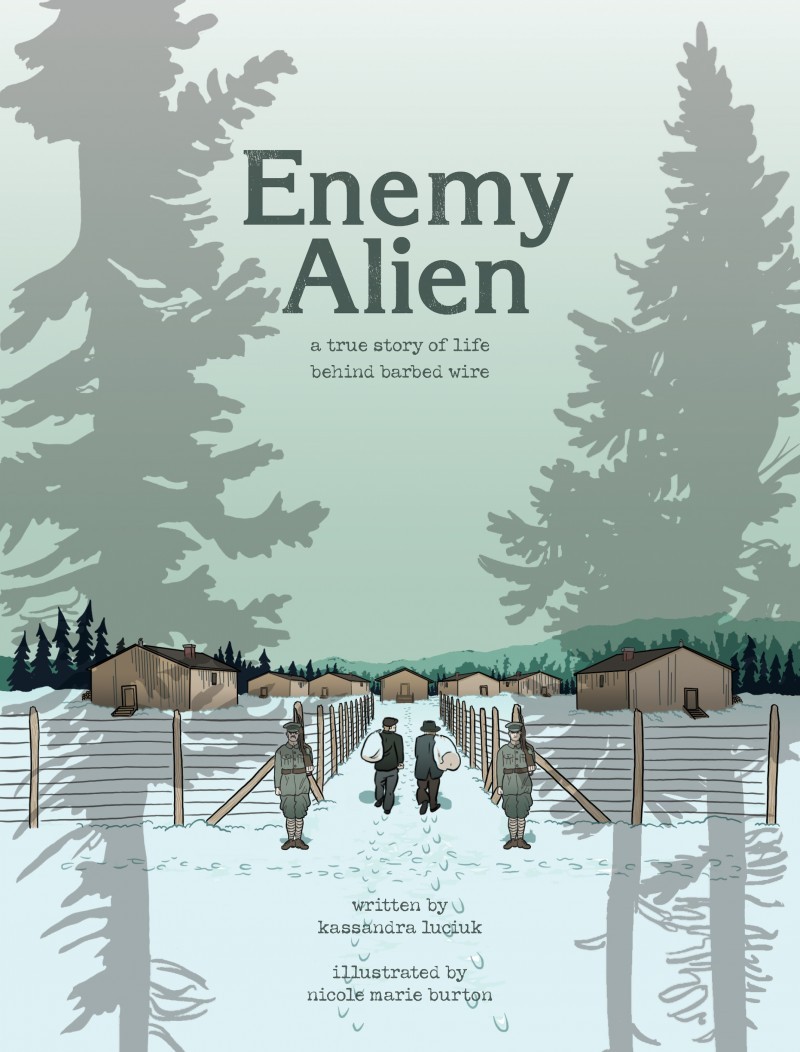 This graphic history tells the story of Canada’s first national internment operations through the eyes of John Boychuk, an internee held in Kapuskasing from 1914 to 1917. The story is based on Boychuk’s actual memoir, which is the only comprehensive internee testimony in existence.

The novel follows Boychuk from his arrest in Toronto to Kapuskasing, where he spends just over three years. It details the everyday struggle of the internees in the camp, including forced labour and exploitation, abuse from guards, malnutrition, and homesickness. It also documents moments of internee agency and resistance, such as work slowdowns and stoppages, hunger strikes, escape attempts, and riots.

Little is known about the lives of the incarcerated once the paper trail stops, but Enemy Alien subsequently traces Boychuk’s parole, his search for work, his attempts to organize a union, and his ultimate settlement in Winnipeg. Boychuk’s reflections emphasize the much broader context in which internment takes place. This was not an isolated incident, but rather part and parcel of Canadian nation building and the directives of Canada’s settler colonial project.

“This graphic novel tells a great story in an innovative format which is a ‘spot-on reflection’ of the Ukrainian-Canadian experience. The material was presented with integrity and in a format accessible to a wide audience.”

“In legend, the First World War marked the birth of Canada. In reality, it represented the apogee of one brutally militarized version of a particular vision of ‘Anglo Canada.’ Vividly told from the perspective of Ukrainians detained in concentration camps, and then sent as forced labourers to Cape Breton, Enemy Alien brilliantly reveals both how these men were victimized as ‘aliens’—and how they stubbornly resisted as flesh-and-blood human beings.”

“Expertly narrated and beautifully illustrated, Enemy Alien has much to teach us about the injustices of war, internment, and political repression, past and present.”

“This bleak moment in Canadian history should be part of our children’s history lessons. Kassandra Luciuk has done a wonderful job bringing this historical event to life.”

“A vivid slice of Canadian history told in innovative comic-book style. Enemy Alien presents a powerful vindication of immigrants who, then and now, contribute to building a better Canada.”

– Suzanne Berliner Weiss, author of Holocaust to Resistance: My Journey

“All the more troubling for being a true account of the crippling legacy of Canada’s first national internment operations, Enemy Alien obliges us to look at an injustice that left its victims afraid to speak of what they had endured, even as Ottawa’s men tried to erase this history. An evocatively graphic refutation of their ploy and a unique portrayal of a wrong once almost deleted from our national conscience.”

“Haunting, infuriating, illuminating, inspiring, and gorgeously illustrated, this graphic history, based on a never-before-available memoir, tells the story of a young Ukrainian immigrant who, dubbed an enemy alien, experienced first-hand the brutality of incarceration during his internment by the Canadian state during the First World War. The mystery of the memoir’s narrator—an unknown man and an everyman, disillusioned with the supposed pillars of western democracy—leads to a clarity of insight that will resonate with many readers and stimulate plenty of debate. At a time when the world is seething with intense anti-migrant racism, this is a timely, must-read history.”

“The illustrated world of Enemy Alien rings so true, in all its black, white and many greys. It’s a gift to our understanding of Canada and of ourselves.”

“Enemy Alien is a powerful and superbly illustrated examination of internment during World War One. nicole marie burton’s haunting drawings skillfully complement the words of the anonymous author, and Kassandra Luciuk’s introductory essay provides important historical context. This book is a welcome addition to the growing field of graphic history.”

“This is an altogether remarkable graphic novel, a close study of a tragedy for the Ukrainians and for Canadian society at large, recounted vividly. A memorable work.”