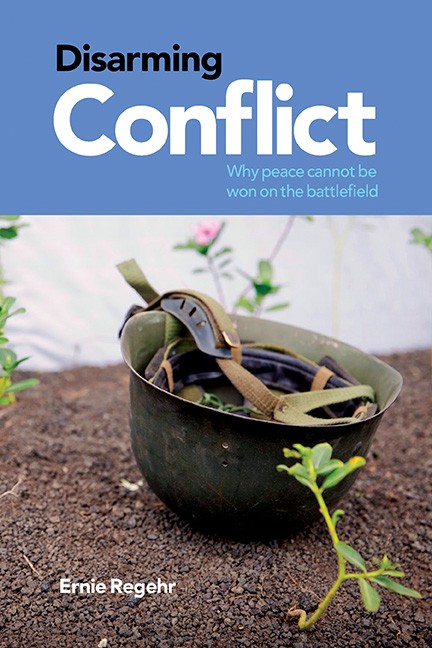 Wars fought over the past quarter century have been a spectacular failure. The overwhelming majority end in military stalemate and are settled at the negotiating table, with the grievances that led to the war still unresolved. In Disarming Conflict famed peace activist Ernie Regehr shows that force cannot simply override or transcend the social, political, and economic realities of conflict.

War prevention, Regehr argues, is more successful when security policies address the conditions that most directly affect people’s lives and that are most instrumental in generating deep grievances and the despairing conclusion that there are no alternatives to the violence. Disarming Conflict sets out approaches, initiatives, and policies that steer away from the futility of fighting and promote non-military efforts towards “winning the peace.”

In this timely and insightful volume, Ernie Regehr demonstrates that war can be avoided. He shows that there are well-established ways of preventing social, economic, ethnic, or regional conflicts from escalating into violent confrontation. Policymakers and civil society organizations will find sustenance for their own efforts toward building sustainable and just peace.

Disarming Conflict provides one of the most succinct and persuasive cases for the mitigation and drawing down of modern warfare, not just for its brutality and destructiveness, but for its inability to fulfill its own deluded purpose.

This book is a must-read for both the peacemaker and the warrior. Ernie Regehr explains unequivocally “why peace cannot be won on the battlefield.” His book leaves no doubt that we must learn to negotiate with our enemies. His in-depth explanation of conflicts around the world is both informative and fascinating.

Ernie Regehr reveals what fresh insights can emerge from a hard-nosed, evidence-based reappraisal of the contemporary politics of peace and war. Disarming Conflict is warmly recommended for those who still cling to the stereotypes of dreamily idealistic peaceniks and hard-nosed warriors – for after reading Regehr’s calm, rigorous, and utterly persuasive analysis, they will find their worldview permanently and usefully unsettled.

Disarming Conflict made me want to stand up and cheer – finally, a book that confronts, articulately and impeccably, modern assumptions about the utility of war in resolving global disputes. Regehr’s book is a meticulously researched call to disarm and proves why he is Canada’s preeminent thinker on conflict issues, challenging readers and policy-makers to question the effectiveness of our rising militarism. I will be quoting liberally from Disarming Conflict for years to come.

For any self-proclaimed “realist” who may be inclined to dismiss anything written by a peace activist, this is no work of utopian fantasy. Disarming Conflict is evidence-based and entirely practical. It challenges the myth that there are no real alternatives to violence for achieving regional, national, and global interests.

In human society the desire for peace is universal yet the reality of war is ubiquitous. This explains why at any given time most nations are at peace but prepared for war if necessary. But it also proves that non-stop warfare has failed to secure lasting peace. In this important new book, noted peace activist Ernie Regehr explains why and how “winning the peace” requires a shift from the military battlefield to non-violent approaches, initiatives, and policies that address human insecurities and group grievances.

[A] compelling and persuasive book.

Ernie Regehr brings a wealth of knowledge and many years of thought to the issue of conflict and gives us a powerful counter to the deeply embedded assumption that there are seldom alternatives to war. By providing a huge number of examples, and often drawing on personal experience, Regehr shows both the extent of the problems and the disastrous consequences of reliance on military responses, and illustrates the many alternatives that are so often sidelined. This is an immensely useful book and a welcome antidote to the common obsession with war in the study of international security. There are other ways.

Regehr never argues that war is morally wrong, but over and over again he shows that it is expensive and tends to be ineffective. Hopefully, political leaders around the world will be able to hear this message.

With Disarming Conflict Ernie Regehr has produced a solid critique of the futility of war. Leaders around the globe would be well advised to heed its call for conflict prevention strategies and a sustained investment in the peaceful settlement of disputes.

The issues of war and peace are like a giant jigsaw puzzle, which Ernie Regehr has put together in a masterful manner. Studious, graceful, and authentic, Regehr’s writing shatters the illusion that war is necessary for peace. Building peace is painful, but, in a book that will long endure, Regehr shows how to “win the peace.”

Disarming Conflict makes the case, repeatedly, that war is destructive and offers no road to peace. Regehr shows clearly that wars do not resolve conflicts, and they leave political, economic, and psychological ruin in their wake. Disarming Conflict shows that the foundations of security and peace are found in development, democracy, disarmament, diplomacy, defence, and gender equity. The evidence is irrefutable. Disarming Conflict is an indispensable read for all people who desire peace.

Disarming Conflict is a masterpiece highly recommended to commanders-in-chief, diplomats, and peacemakers. Ernie Regehr has persuasively and convincingly shown that intrastate conflicts are rarely won on the battlefield and are usually settled at the negotiating table. Let us heed the call and invest just as much in peace diplomacy as we do in arms.

Ernie Regehr marshals the evidence to demonstrate that, in contemporary warfare, the effort by states to militarily impose political objectives fails more than 90% of the time. Then, in this powerful, comprehensive, and eminently practical book, he lays out the methods and means of a more promising alternative – war prevention or, as he terms it, “disarming conflict.” Following this approach the international community would invest far less in military hardware and far more in the “infrastructure of positive peace and the political capacity to bring relevant parties to relevant political processes. … This book is a must-read for all those – from policy makers and practitioners to ordinary citizens – who are interested in helping our governments move decisively away from military quagmire toward an effective strategy to win the peace.