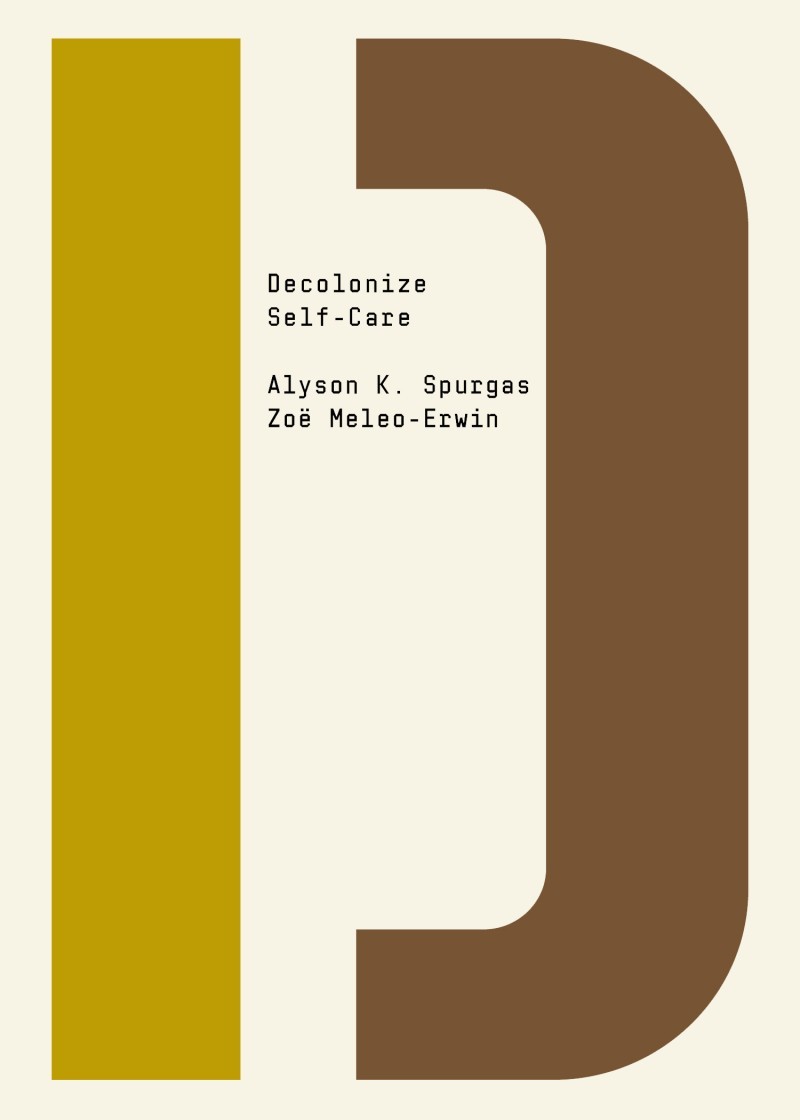 Decolonize Self-Care mounts a sharply critical investigation into contemporary “self-care” practices—particularly those that embrace using mindfulness and other techniques such as tantra and yoga, as well as gluten-free and low-carbohydrate diets. The authors argue that “self-care” has become an industry, and one that is often marketed to and by wealthy, cisgender, white women in the global north.

Spurgas and Meleo-Erwin contend that the rhetoric of “feminism” is regularly co-opted in selling self-care, with wealthy white women being the primary consumer target and also those who profit from self-care entrepreneurship. Through careful research and sharp analysis, the authors offer a vision of more radical, communal, collective, anti-racist, and anti-capitalist forms of care for chronic pain, burnout, depression, anxiety, and other conditions which are often the result of gendered, sexualized, racialized, ableist, and colonialist traumas under late capitalism. Utilizing critical feminist disability studies, madness studies, Black feminist scholarship, decolonial theory, and other intersectional and Marxist feminist critique, the authors re-theorize care outside of and beyond what current self-care rhetorics generally allow. A smart and often laugh-out-loud read, Decolonize Self-Care speaks to academic and lay audiences alike.

People today are overworked, exhausted, worn down, and many (hello!) are full of rage—as we should be! Care is something so many of us desperately need. But, at the same time, contemporary self-care industries are deeply out of touch with the types of care that many people actually require and are clamoring for. Today’s self-care messages range from: “Do self-care because you will become a more efficient entrepreneur” to “Do self-care because it’s the right thing to do for your community and the world” to the more basic mantra (which connects the first two) “Do self-care because you’ll feel better—and be your authentic/empowered/ultra-Zen self(!)—if you do.”

But in each of these messages, the self-carer is always the one who singularly benefits: you might grow your own personal brand and achieve financial success, feeling calm and centered while doing so, in the first example, or you may acquire other mental health benefits, including an overall feeling of goodwill or connection, higher self-esteem, and lower anxiety because you did something positive for the world, in the last example. This is to say, even while using the language of “community” and “social justice” (and, as we’ll discuss, often “diversity” and “inclusion”), today’s versions of self-care offer some benefits but don’t go nearly far enough to alter the social conditions that make us feel like shit in the first place. In this sense, they are a Band-Aid, at best—and at worst, they further entrench existing and unequal structures of power by emphasizing individualist solutions to what are ultimately systemic problems.

To be clear: When we say, “existing structures of power” and “systemic problems” we mean intersecting forms of inequality, including white supremacy, nationalism, sexism, homophobia, transphobia, and ableism, all of which are historically and contemporarily intertwined, and all of which originate with and/or are exacerbated by capitalism. These forms of oppression are further connected to colonialism and the processes by which white Europeans have subjugated (and continue to subjugate) everyone else.

Following decolonial theorists Eve Tuck and K. Wayne Yang, we might further differentiate between external colonialism and internal colonialism—the former being predicated on the extraction of indigenous resources, including human beings, to build wealth and power for colonizing nations, while the latter involves modes of control and subjugation of people, land, and animals within an imperial nation. Importantly for us, given our concern with self-care commodification and how it travels, the United States, as a settler colonial nation, is an example of both. While contemporary coloniality may differ in design and execution than historical forms, the key here is that overall systems of domination and exploitation are ongoing, with negative material, cultural, psychological, and health effects, particularly for Black and Indigenous people of color (BIPOC).

Importantly, coloniality is not sustained through physical force alone but also through ideas and practices, particularly those related to economic and government policy. Our understandings of reality are deeply shaped by these intersecting forces. That is, these forces shape our ideas of what is and isn’t a problem (for instance a social, economic, or health problem), what causes said problem, who is responsible for addressing it, and what should be done. In highly unequal social and economic systems, regardless of intent, the impact of ideas and practices—including those related to self-care—can reproduce the status quo, in general, and coloniality (relations of power, domination, and exploitation rooted in Eurocentrism and white supremacy), in specific.

In the United States, the work of decolonization, or the sustained undoing of these matrices of power, domination, and exploitation, has been ongoing since European conquerors first set foot upon Turtle Island (the term commonly used by many Indigenous people, particularly in northeastern areas, to refer to the North American continent)—a struggle born of necessity. At a basic level, decolonization involves: an intellectual and emotional grappling with the ecological destruction and human suffering first wrought by coloniality in the name of profit and power; an understanding of the fact that in the United States, Indigenous peoples as well as those of African descent have been (and still are) the target of and suffer most from these genocidal and exploitative processes even though these processes ultimately harm everyone to different degrees; a redefinition and redistribution of wealth and land as a means by which to begin addressing these atrocities; and a radical rethinking and reconfiguring of both social relations and societal institutions in order to promote collective well-being. Finally, it requires a dismantling of whiteness, which was never a true indicator of ancestry, but rather a form of securing and disseminating power and property.