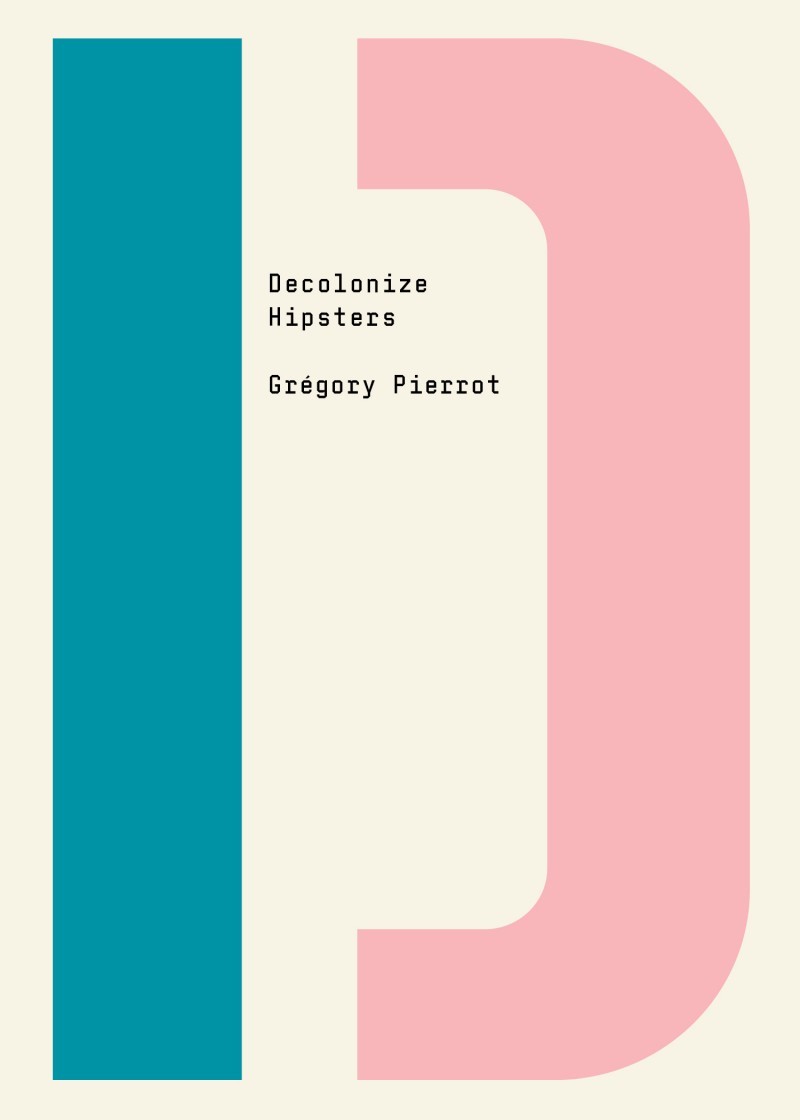 Few urban critters are more reviled than the hipster. They are notoriously difficult to define, and yet we know one when we see one. No wonder: they were among the global cultural phenomena that ushered in the 21st century. They have become a bulwark of mainstream culture, cultural commodity, status, butt of all jokes, and ready-made meme.

But frightening as it is to imagine, for more than a century hipsters have been lurking among us. Defined by their appearances and the cloud of meaning attached to them—the cool vanguard of gentrification, the personification of capitalism with a conscience—hipsters are all looks, and these looks are a visual timeline to America’s past and present.

Underlining this timeline is the pattern of American popular culture’s love/hate/theft relationship with Black culture. Yet the pattern of recycling has reached a chilling point: the 21st century hipster made all possible past fads into new trends, including and especially the old uncool. In Decolonize Hipsters, Grégory Pierrot gives us a field guide to the phenomenon, a symptom and vanguard of the wave of aggressive white supremacist sentiment now oozing from around the globe.

Ever since Norman Mailer styled himself as a “White Negro” and Anatole Broyard passed as a white jazz fan, the hipster has been a subject of fascination in cultural criticism, a symbol of the love and theft at the heart of American popular culture. Grégory Pierrot’s fiercely illuminating short book dissects the political complacency and racial delusions of hipsterism, but it does so with a verve, swagger and irreverence. Pierrot provides us not only an anatomy of hipsterism’s past, but a vision of its possible future.

In recent years, cultural institutions, click-bait publications, and lazy influencers have emptied “decolonizing” of its revolutionary, indigenous substance. The Decolonize That! book series provides a tongue-in-cheek perspective on these co-optations and is a useful toolbox to think through these ideas. Series editor Bhakti Shringarpure continues the crucial work she started with Warscapes magazine by bringing together a wonderful community of thinkers around questions of struggles, borders, and narratives.

– Léopold Lambert, editor-in-chief of The Funambulist

“Decolonize Hipsters, the opening salvo in a new series of handbooks, places hipsters at the vanguard of a movement that starts with gentrification but ends with gifting Trump the White House and giving rise and misguided succour to white supremacists … Quoting Karl Marx through to Lemmy from Motorhead, Pierrot fleshes out the essence of modern hipsterdom and its pernicious contemporary manifestations … In your face for all the right reasons, it’s full of fun and thoughtful facts, interesting anecdotes and parallels that all lead in the same direction—how hipsters steal, suck up and squander what they should hold dear … A quick and thought-provoking read that eloquently sets an agenda, justifies it, and demands that action is taken.”

Look at that fucking hipster. Pants are tight, sneakers vintage and pristine; the Poison t-shirt is ironic (or IS IT?), visible tattoos are edgy, a fine trucker hat covers his tousled undercut, all manners of hair bedeck a pallid face framed by thick horn-rimmed glasses. John Brown might have approved of his facial hair, had he lived on instead of getting himself hanged fighting against slavery a hundred and fifty years ago. Loser, amirite? Ambling down the sidewalk, skinnycino™ in hand, weaving in and out of traffic on his fixie, what have you, he’s on his way to his local, a former dive bar bought out by Wall Street investors and renamed Dive Bar, cans of PBR served in a bucket, microbrews on tap, avocado toast on the menu, you know the deal. It’s right around every corner of every city now, and that is where that fucking hipster is always going. There he may meet his mates and there may well be women too—you’ll know them by the fashion, the twenty different kinds of bangs, flower tattoos creeping down bare arms and mix-and-match stratas of once and future cool fashion—vintage anything, because all that is past, whether it was cool then or lame then, is cool now; all carefully crafted carelessness. You know their night will be brighter than your day, Instagrammed and hashtagged for good measure. You may only live once: hipsters live again, and again, and again.

A cliché, you say?

Of course. And like all clichés, the hipster has become part of the décor, a nuisance from the past woven so seamlessly into the fabric of our days that we no longer notice. There’s no telling a hipster from a douchebag these days—both are everywhere, seeking uniqueness in universally recognizable ways. It wasn’t always like this, not really. Once upon a time, in the 1990s of yore, the hipster’s natural habitat consisted of specific, delimited urban ecosystems: Manhattan’s Lower East Side; Brooklyn’s Williamsburg; Berlin’s Kreuzberg; London’s Shoreditch (or the fictional Hosegate of BBC’s cult classic Nathan Barley); Paris’s Marais (aptly, French for “swamp”). Since then, hipsters have multiplied exponentially and expanded their domain. The whole world is their oyster bar now, and we all eat in it.

Yet before he was cut into pieces and scattered Osiris-like into the zeitgeist, the hipster had to be born. Though none would claim him, he had many parents, some of whom we will observe in following chapters. For now, let us just say that he materialized in the late 1990s from the same heady brew that gave us the major subcultures of the twentieth century: avant-garde art meets popular culture at some uncharted crossroads and, around innovators in art, fashion, journalism, organizing, forms a scene of connoisseurs, fans, and followers that grows as the niche goes from well-kept to open secret. But for all that a trend may owe to popular art, popularity necessarily kills its claim to artistry. A trend too popular becomes a standard, a commonplace: it finds its spot on the wall next to taxidermized narwhals and LCD Soundsystem record sleeves. It may manage to retain a measure of surprise, but once its conventions are known, it becomes part of the cultural fabric. So, arguably, went the twenty-first century hipster: he waxed (vinyl’s the best), he waned, or maybe he diffused, all the more loathed because his idiosyncrasies melted in the mainstream.

And so these are the 2020s, and you can no longer really see the hipster. He is dead, buried in 2004 and again the following year, and every year after that until about 2016, when we suddenly found ourselves dealing with much more important matters, like the death of truth. Donald Trump as president: so much for irony. But perhaps the rise and fall of hipsterdom and the reawakening of the white supremacist beast that ushered Trump into the White House are not completely unrelated. Let us now return to John Brown, the leader of the 1859 antislavery raid on Harper’s Ferry. Bear with me, or more specifically, beard with him and the lush wonder of facial hair he sported in his guerilla years, a fashion statement that tripled as a religious and political statement—as Sean Trainor has demonstrated in his research, the history of American facial hair trends is political, and therefore racial. Reflecting on Brown’s execution after the failed raid in his poem “The Portent,” Herman Melville dubbed the man’s beard “the meteor of the war.” The beard stuck out from the hood which Brown was forced to wear when he was hanged, and appeared to Melville as an omen, the celestial sign announcing the upcoming Civil War. My turn then, and there she blows: from the vantage point of 2020, let me declare here (and discuss later) the hipster’s undercut/beard combo a portent of its own, announcing the arrival of the orange love child of Andrew Johnson and Jefferson Davis at the White House. In order to get there, and then rampage through American streets, in full view of all, unashamed and unimpeded, the beast had to feed and grow strong. The hipster provided it with comfort and nourishment; it also offered fair-trade, Chemex-brewed cover so that the beast could sneak by undeterred and undetected. When the hipster finally fell, struck by one final opinion column, fascism rose from that empty shell, Dreamcatcher-style.

So that’s the hipster. And you’ll get there with me, eventually, but for now let’s backtrack a bit. Let me sit down and, like everyone before me, ponder the indefinability of the hipster phenomenon even as I go about attempting to define it.

The common agreement is that the most recent incarnation of the hipster came about in the late 1990s. The decade boasted a few new subcultures and musical genres, easily reduced in collective memory to the sonic and visual markers they flaunted as so many anthems or flags flapping in the wind: dripping superfuzz, hunger dunger dang singing, plaid shirts and jean shorts for grunge, glow sticks and phat pantz for the candy raver, specific brands for specific scenes, so on and so forth. But the hipsters, to the extent that you saw them in relation to music in particular and culture in general, weren’t necessarily attached to a particular scene so much as they boasted all-around scene savvy. It bears mentioning that the slow rise of the hipster was contiguous with the rise of indie rock, this amorphous blob of a genre label best defined in the song “Gimme Indie Rock” by one of its flag-bearers, Lou Barlow, as “a new generation of electric white boy blues.”

An aside: Lou Barlow’s short historical survey and celebration of “indie rock” was also very much a mockery of it and its heroes, even as Lou Barlow himself was well on his way towards becoming one of them. Somewhere in the potent brew of self-consciousness, self-assessment and self-deprecation that yielded Sebadoh’s little gem also lurked the monster to come. Barlow knew well the utter whiteness of his being, the unspoken quest for cool that underlay all pop scenes and how, at some increasingly inchoate ideological level, these impulses both welcomed and clashed with the possibility of commercial success. But in this, he himself echoed awareness shown not by a white boy but by Sonic Youth’s bassist Kim Gordon.