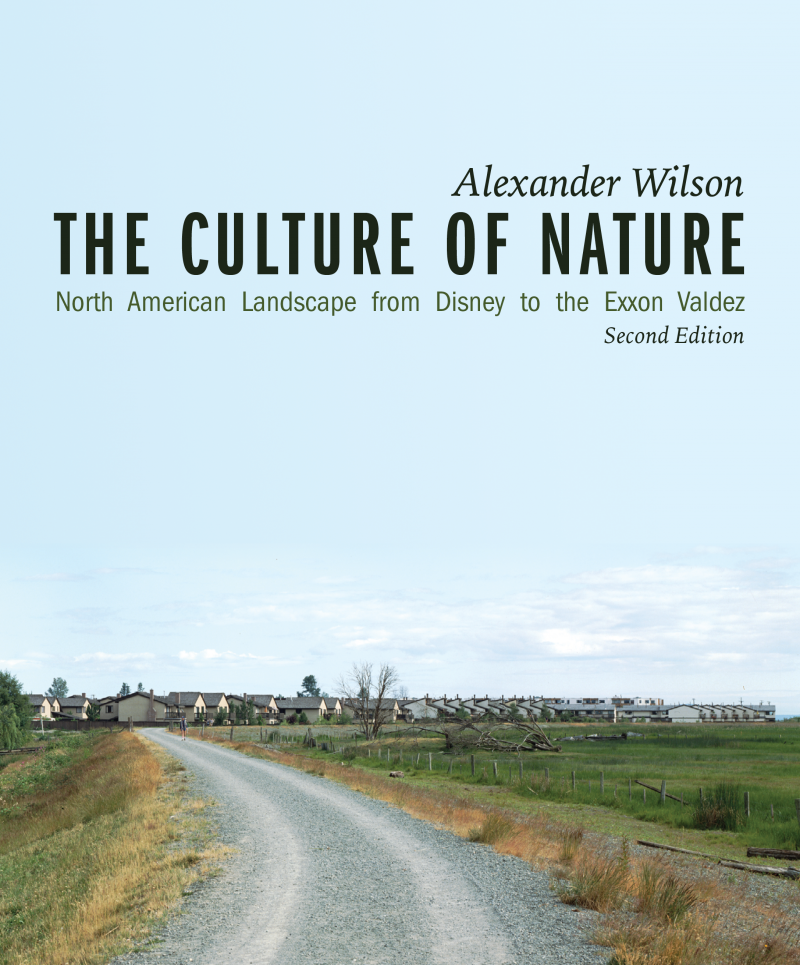 Since it was first published in 1991, few books have come close to capturing the depth and breadth of Alexander Wilson’s innovative ecocultural compendium The Culture of Nature. His work was one of the first of its kind to investigate the ideology of the environment, to critique the future according to Disney, and illustrate that the ways we think, teach, talk about, and construct the natural world are as important a terrain as the land itself. Extensively illustrated and meticulously researched, this edition is exquisitely revised and reissued for the Anthropocene.

This lovely book awakened and inspired a generation of environmental thinkers by showing that the nature we urban North Americans love to love is not a counterpart to culture; it is a world of magical artefacts built and inhabited over time in circumstances less free than their appearance might suggest. Twenty-five years, thousands of new books, and a climate crisis later, this indispensable book is more relevant than ever. This smart, critical and yet compassionate writer, beloved in memory as in life, reminds us not to be naïve about nature, but also, not to despair; if nature is an imagined utopia, we can re-imagine it so as to better nurture the fragile complexity of life on earth.

This is a beautiful book about ugliness, which takes the innumerable facts of the degradation of nature as so many multiple starting points for the history of the production of modern space. Wilson ranges across cognate yet extraordinarily varied topics such as nature films, theme parks, tourism, world’s fairs, shopping malls, and strip-mining and nuclear plants, not merely to trace their histories but also to map out their ideologies—for it is myth and ideology that ultimately legitimize and promote the violence done to the land. It is a remarkable performance, of the greatest theoretical as well as practical-political interest.

– Fredric Jameson, author of Postmodernism, or, the Cultural Logic of Late Capitalism

My first experience with Alex Wilson was in a packed, steamy room at the University of Waterloo at an early conference of the Society for Ecological Restoration in 1992. He organized a session that argued the soul of restoration was interdisciplinary, culturally aware, politically sensitive, ethically engaged and continuously observant. Standing and gesticulating amidst restoration scientists and practitioners, this was the same Alex Wilson who had authored The Culture of Nature, a book that shook my world the year before. At once erudite, playful, scholarly, and urgent, Alex picked up the temper of the times, and with enviable prescience connected the engaged practices of landscaping, gardening, and restoration to a cultural theory of nature and the fever dreams of those who chose to colonize imagination. It is testament to Alex’s particular genius that it emerges for a new generation, who will find the messages eerily fresh, provocative, and profound.

– Eric Higgs professor of environmental studies, University of Victoria, former Chair of the Society for Ecological Restoration, and author of Nature by Design

When I first read The Culture of Nature in the 1990s, I was entranced by Alex Wilson’s brilliant, original, generous road trip through North American cultural ecologies; the book appeared on many course syllabi in my early years teaching Environmental Studies. Reading the book again nearly 30 years later, I am struck by the fact that, although a great deal has changed—the internet, the re-entrenchment of the far Right, the intensification of struggles for social and environmental justice by racialized groups and Indigenous peoples— many of Wilson’s insights remain as sharp now as they were then. In this era of deepening ecological and climate crisis, we must think about landscapes as sites of ecological, technological, cultural, social, political, and imaginative entanglement. In particular, in Wilson’s own words, we must “build landscapes that heal, connect, and empower, that make intelligible our relations with each other and with the natural world.”