The Making of the Energy & Chemical Workers Union 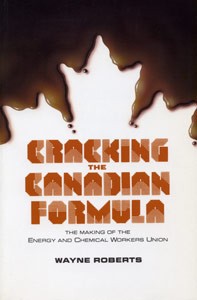 Cracking the Canadian Formula is about succeeding because you are Canadian–not in spite of it.

It is about Canadians doing all those things we’re not supposed to be much good at. Things like outmanoeuvring monster corporations; like standing up to Americans; like putting regional differences aside; like blowing the whistle on polluters; like rising above linguistic differences.

But, most of all it’s about cracking the Canadian formula–about learning how to win on our own terms, in our own time, in our own way. No fanfare. No muss. No fuss.

Cracking the Canadian Formula is not just the story of Canadians building a unique union. It is the story of how we succeed in Canada when we have the courage to try it our own way.

That makes it the story of Canada so far. It also makes it a story that just might hold the secret of Canada yet to come.

This is the encyclopaedia of what unions can do to help build a made-in-Canada movement for personal, social, and economic independence.