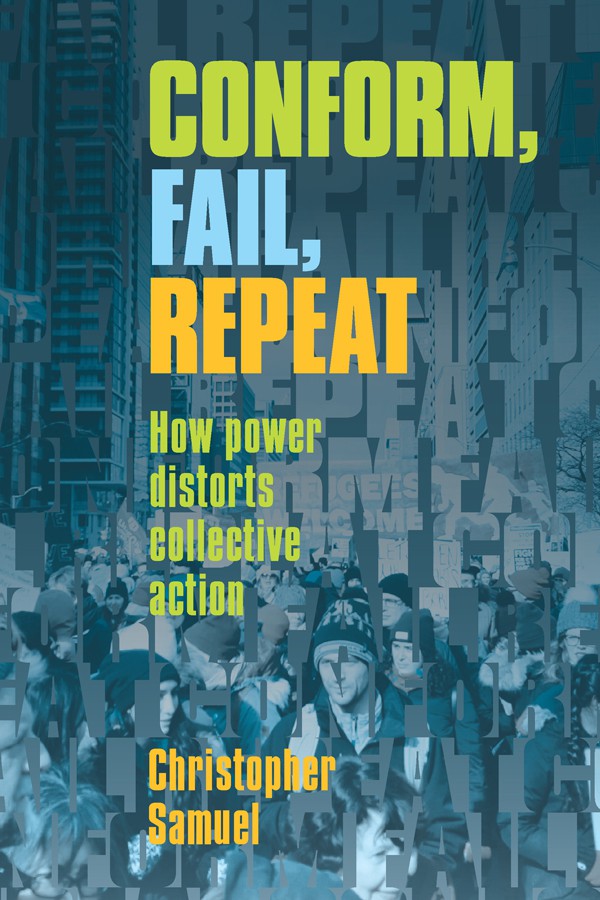 Anti-globalization activists have done little to slow capitalism’s global march. Many of the gains made by decades of identity-based movements have been limited to privileged subgroups. The lesson of these movements is clear: struggle for change is essential, but the direction of change matters considerably.

Like movements of the past, current social movements such as Black Lives Matter, Idle No More, and the growing anti-Trump movement, must navigate a path between reformism and radicalism, pragmatism and idealism, capture and independence.

In Conform, Fail, Repeat, Christopher Samuel uses Pierre Bourdieu’s central “thinking tools” to show how power and domination force movements into a no-win choice between conformity and failure. With special attention to North American LGBTQ politics and the G20 protests in Toronto, Conform, Fail, Repeat shows how Bourdieu’s work can give movement observers as well as participants new tools for tracking and avoiding the pitfalls of conformity and failure.

Samuel mobilizes Bourdieu’s key concepts to produce a fluid and stimulative critique from inside of the built-in predicaments of identity-based social movements. Students and militants of radical politics will benefit from pondering and acting on his fresh and candid arguments.”

In Conform, Fail, Repeat, Christopher Samuel presents a thought-provoking and timely exposition on the sociology of social movements. Drawing upon the concepts articulated by Pierre Bourdieu, Samuel provides fresh insights and new ways of thinking about power and dominance within collective struggles for justice, the conformity and failure inherent to social movement participation, and the conflict between the competing visions that characterize social movements—radical transformative change or the immediate elimination of suffering. Conform, Fail, Repeat concludes by sketching out a new model of ‘symbolic democracy,’ which academics and activists alike should find to be challenging and informative.”

– Tom Warner, Queer activist and author of Never Going Back, A History of Queer Activism in Canada and Losing Control, Canada’s Social Conservatives in the Age of Rights

What might the next left look like? Putting the theories of Pierre Bourdieu to impressive and challenging work, Christopher Samuel suggests a critical and realist approach to twenty-first-century movements struggling for human emancipation. Looking at specific moments including the G20 protests and Black Lives Matter, Samuel provides refreshingly original and non-polemical insight into some of the most contentious issues those movements face – such as how to reconcile political effectiveness with internal democracy and how to avoid the seemingly perpetual pattern of movements losing sight of the revolutionary visions that inspired them. A must-read for leftists as they seek to understand, and to change the very shape of, a storm-tossed political world.

Anyone who has grappled with the internal power dynamics and the seemingly incommensurable conflicts of social justice and activist movements will welcome the insights offered by Christopher Samuel into how social power functions, how domination and injustice are perpetuated, and how efforts at resistance and progressive change are continuously deflected, distorted, and dismissed. Samuel provides a rich, challenging, and complex analysis of contemporary left, alterglobalization and LGBTQ politics; this book enriches political theory and social movement studies while offering real wisdom and hope to those who work for social change.

Samuel mobilizes Bourdieu’s key concepts to produce a fluid and stimulative critique from inside of the built-in predicaments of identity-based social movements. Students and militants of radical politics will benefit from pondering and acting on his fresh and candid arguments.”

Samuel’s lucid analysis of the paradox of success and failure of social movements is a must-read for those of us engaged in such politics. Deftly employing Bourdieuian sociology to analyse a pivotal moment in LGBTQ history and the G20 demonstrations, Conform, Fail, Repeat lays out a theoretical framework to help us find our way out of an historical impasse where co-optation or marginalization appear to be the Janus-faced outcome of progressive politics.

– Tim McCaskell, author of Queer Progress: From Homophobia to Homonationalism