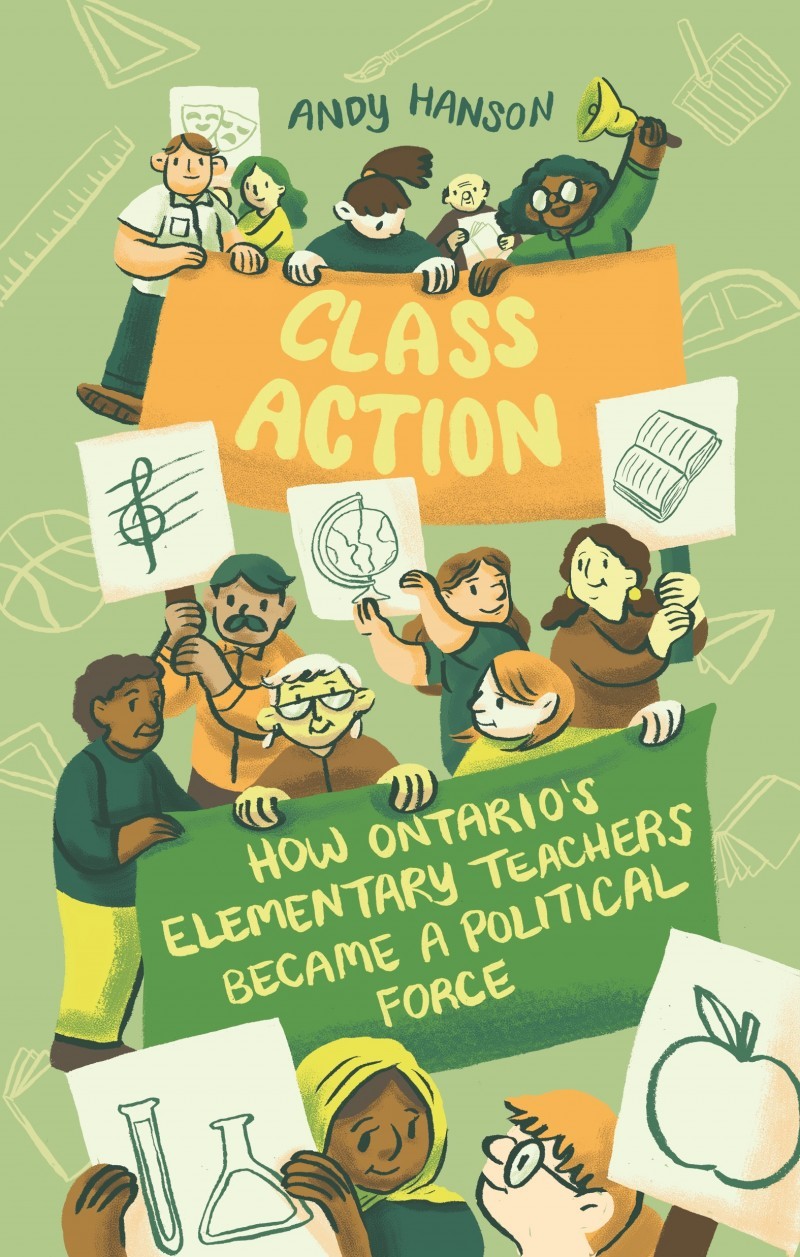 In this inspiring history of a union, labour historian Andy Hanson delves deep into the Elementary Teachers’ Federation of Ontario (ETFO) and how it evolved from two deeply divided unions to one of the province’s most united and powerful voices for educators.

Today’s teacher is under constant pressure to raise students’ test scores, while the rise of neoliberalism in Canada has systematically stripped our education system of funding and support. But educators have been fighting back with decades of fierce labour action, from a landmark province-wide strike in the 1970s, to record-breaking front-line organizing against the Harris government and the Common Sense Revolution, to present-day picket lines and bargaining tables.

Hanson follows the making of elementary teachers in Ontario as a distinct class of white-collar, public-sector workers who awoke in the last quarter of the twentieth century to the power of their collective strength.

“Andy Hanson’s Class Action is an accessible and fascinating explanation of the history of public education in Ontario and the battles that made public elementary teachers into a force in the labour movement.”

“A compelling recounting of the unique way that women elementary teachers in Ontario struggled to achieve equity in education through their union.”

“An essential contribution to scholarship on an increasingly significant part of the labour movement in Canada—elementary teachers. Hanson fills a huge gap in labour history and labour studies by documenting the process by which elementary teachers and their union, ETFO, have become one of the most important forces in Ontario politics and a key actor in the fight against neoliberalism in education. This is a must-read for anyone interested in understanding the central contributions of public sector workers like teachers to today’s labour movement.”

“This book is a marvelous exploration of the history of two Ontario teacher unions, and how their long-term conflicts eventually ended up in their amalgamation. Extensive research and an analysis based on both gender and class provides us with a comprehensive picture of relations between teachers’ organizations and the state during the twentieth century.”

“Class Action provides important insight into the public school system, the struggles of teachers’ unions, and class—both the social relations and the place where teachers work and students learn. Andy Hanson offers a valuable combination of research and theory and insights from his own experiences as teacher and unionist. It is well worth the read.”

“A richly detailed and inspiring account of teacher unionism and its role in the defence of education in neoliberal Ontario.”

“How did teachers become militants in the labour movement, singled out for abuse and attack by austerity-minded politicians and reactionaries of various stripes? Andy Hanson, himself a teacher, tells this riveting story of strikes, hard bargaining with the state, and the ways in which men and women in the classrooms experienced unionism differently. Class Action is a deeply researched and historically contextualized account of the rise of the Elementary Teachers’ Federation of Ontario. A must-read for anyone interested in the education system, the labour and women’s movements, and contemporary politics.”

“Class Action is a meticulous chronicle of how Ontario’s women’s and men’s elementary teacher unions became a significant political force and, once merged, a full-fledged member of the labour movement. In highlighting the women teachers’ advocacy for equality rights and the broader context of the labour movement’s struggle against the neo-liberal ideology that took hold, Andy Hanson provides a compelling framework for understanding the teachers’ growing militancy. The book is an important contribution to Ontario labour history.”