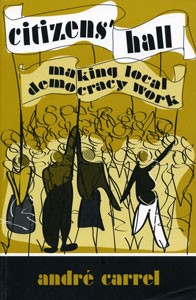 Based on years of practical experience in small towns, Carrel argues for municipal autonomy–for turning what are now “colonies” of the federal and provincial orders of government into independent, mature, and fully democratic entities. For Carrel, the citizen is the sole legitimate source of political power, and the best tool for citizen empowerment is the controversial tool of the referendum.This is the story of how a small municipality broke the rules of local government. It also recounts the author’s irreverence for the status quo and his ideas on the rebuilding of citizenship at the community level.

The value of Citizen’s Hall is that it reports real-world practice rather than the standard academic ‘I see no reason why this shouldn’t work’ that predominates in the field.

The issue of neighbourhood and community democracy, notwithstanding (or perhaps because of) Mr. Harris’s Mega City ordering, is a public policy issues of increasing importance. Maybe the mountain community of Rossland, B.C. has something to tell us!

André Carrel’s story provides an important reminder that there is another aspect to municipal government, one that involves representation of, and response to, local citizens. This book should be of great interest to local citizen groups and community organizations.