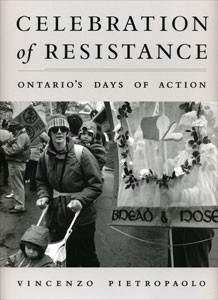 Since 1996, in more than a dozen cities, labour and community groups have organised some of the largest and most creative demonstrations in recent Canadian history. The Days of Action have been a vital force to dislodge the Tory government of Mike Harris, and its “common-sense revolution.” With photographs from all the events, this book celebrates the achievement of large-scale, peaceful, and meaningful protest. Vincenzo Pietropaolo has been documenting social change movements in Canada for years and his keen professional eye brings to this book a wonderful sense of life and humour.

These images bear witness to an everyday kind of response and commitment…Pietropaolo chronicled the passion, drama, and the stories in each city, and honoured the stand that so many people took in those days. His version of those events, deeply personal and humane, challenges the stereotypical images produced and disseminated by the often cynical media…they help us see ourselves as part of a cohesive community…not as victims but as agents in a democratic process.