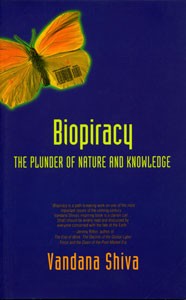 Award-winning scientist and activist Dr. Vandana Shiva argues that genetic engineering and the cloning of organisms are “the ultimate expression of the commercialization of science and the commodification of nature… life itself is being colonized.” According to Jeremy Rifkin, Shiva’s book is “a path-breaking work on one of the most important issues of the coming century… a clarion call [that] should be widely read and discussed by everyone concerned with the fate of the Earth.”

With her characteristic blend of analysis and passion, Vandana Shiva traces the continuity from the European colonization of “native” peoples…to the present appropriation of the natural resources they need for their physical and cultural survival. An important book that should be read by anyone wanting to understand the global threat posed by the technological transformations of organisms, cells, and molecules and by their exploitation for profit.

[Shiva is] one of India’s leading physicists…a leading thinker who has eloquently blended her views on the environment, agriculture, spirituality, and women’s rights into a powerful philosophy.

[Shiva is] one of the world’s most prominent radical scientists.