Beyond the Promised Land

The Movement and the Myth 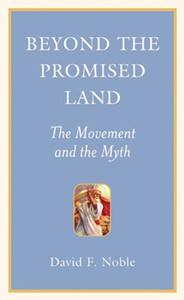 Iconoclast David F. Noble traces the evolution and eclipse of the biblical mythology of the Promised Land, the foundational story of Western Culture. Part impassioned manifesto, part masterful survey of opposed philosophical and economic schools, Beyond the Promised Land brings into focus the twisted template of the Western imagination and its faith-based market economy.

From the first recorded versions of “the promise” saga in ancient Babylon, to the Zapatistas’ rejection of promises never kept, Noble explores the connections between Judeo-Christian belief and corporate globalization. Inspiration for activists and students alike.

Part of the Provocations series.

David Noble’s Beyond the Promised Land traces how abstract myths have shattered the settled social life of particular people in particular places, destroying biological and cultural diversity, breeding insecurity and unleashing the violence and ecological devastation, that characterize our times. In going to the roots of the myth of the promised land, Noble helps us understand our historical moment better. In celebrating the concrete, the here and now, Noble echoes the call of the women’s movement, the ecology movement and cultural diversity and social justice movements and enables a fundamental paradigm shift that our future is in our hands. It is not determined by the myths of the powerful.

A must read for intellectuals and activists.