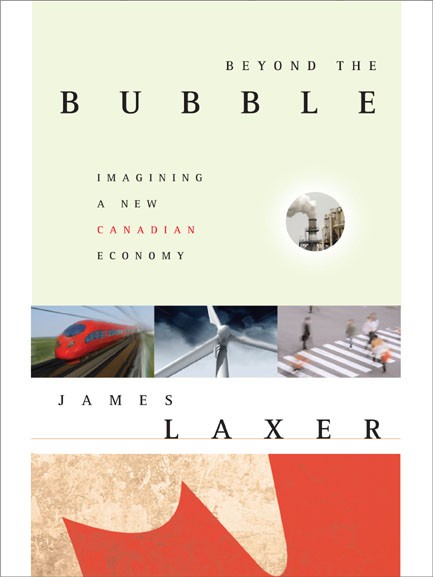 With the onset of the current economic crisis, one chapter in the economic history of the world is ending and a new one is beginning. What role will Canada play in this vastly altered world?

James Laxer examines the anatomy of the crash: the forces that have controlled the global system and the forces that have the capacity to usher in a new global system as the U.S.-centred age of globalization comes to an end. He explores what needs to be done to combat the crash in Canada, and poses the questions we all want to have answered. What comes next for the global economy, and what does this mean for Canada? Where will we fit in? Is an egalitarian economic future possible? What could an economics for humanity look like?

A reflective and useful treatise on where we go from here, Beyond the Bubble is a must-read by one of Canada’s best-known political commentators.

James Laxer has warned for years about the dangers of Canada’s reliance on digging stuff out of the ground for foreign multinationals. He has been proven 100 per cent right by this latest and most spectacular economic crisis. His new book offers both penetrating critique and hopeful vision, and will be invaluable for Canadians struggling to build a better alternative.

– Jim Stanford, Economist, Canadian Auto Workers, and author of Economics for Everyone

Who better than Jim Laxer to provide a concise analysis of the conditions that pushed Canada-and the world-to the economic precipice? But more than simply documenting how we got to where we are, this book offers an impassioned and hopeful prescription for moving Beyond the Bubble and embracing a more egalitarian economic future.

[James Laxer] offers many insightful and well-researched ideas for bringing real democracy and social equality to this country-not just for “imagining a new Canadian economy,” but for actually establishing it. It won’t be easy, he admits, but it can and must be done.

A lucid and timely analysis of the causes, and implications for Canadians, of the economic crisis. It will help spark and shape popular debate on the contours of the new economy which we are challenged to build at home and at the global level to replace the discredited neo liberal model.

Both [of the main] arguments are presented in Laxer’s characteristically lively style and with a useful mix of historical analysis and political economy. Each is also provocative enough that it will generate considerable debate.

With characteristic historical insight, clarity, and candour, James Laxer shows how Canada is at the crossroads between a new and old era of economic globalization…. A must read for Canadians concerned about the country’s economic, social, and environmental future.

This book offers solid evidence to refute the claims of those who insist that the current crisis is a temporary aberration in the economic cycle. It provides a powerful argument against those who are determined to put the system that caused the crisis back on track.

The myriad dog-ears that I left littered through Laxer’s book certainly speak to the great number of explanatory gems he’s produced, the almost constant moments of realization and recognition that attend his patient history of bubble economics … Laxer’s creativity and clear-headedness are worth dog-earing the hell out of [it].