Michael Lynch and the Politics of Community 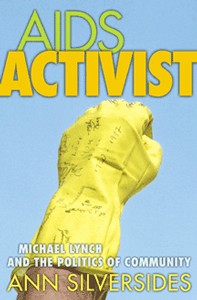 Michael Lynch, the central figure of this book, was a long-time gay activist and a dynamic force in organizing an early response to the AIDS epidemic. Lynch’s prescient articles in The Body Politic spoke to the gay communities of Toronto, New York, and San Francisco. His organizing efforts meant change and hope. AIDS Activist is a crisp and passionate introduction to a wide range of issues. Focusing on personal stories Silversides furnishes a snap-shot history of how the AIDS crisis unfolded and some of the heroic responses to it. Her emphasis on the politics of the gay community response makes this book unique.

This book profoundly moved me and captured vital aspects of Michael Lynch as a person and as a gay and AIDS activist. It presents a remarkable entry point into the life of AIDS organizing through the experiences of one often central activist … [Ann Silversides] has done an invaluable work of historical recovery.

Toronto-based journalist and broadcaster Ann Silversides, who specializes in health policy, had written an interesting hybrid of a book, deftly dovetailing the life of her AIDS activist cousin, Michael Lynch, with a detailed history of AIDS in Canada. AIDS Activist: Michael Lynch and the Politics of Community recounts those early years of the crisis far too well.

Silversides has written a passionate and person book, highlighting a key period in medical and social history, from a Canadian perspective. It is important and captivating reading for health care professionals working in the field of HIV/AIDS and others wanting to learn more about this tumultuous period in medical history.