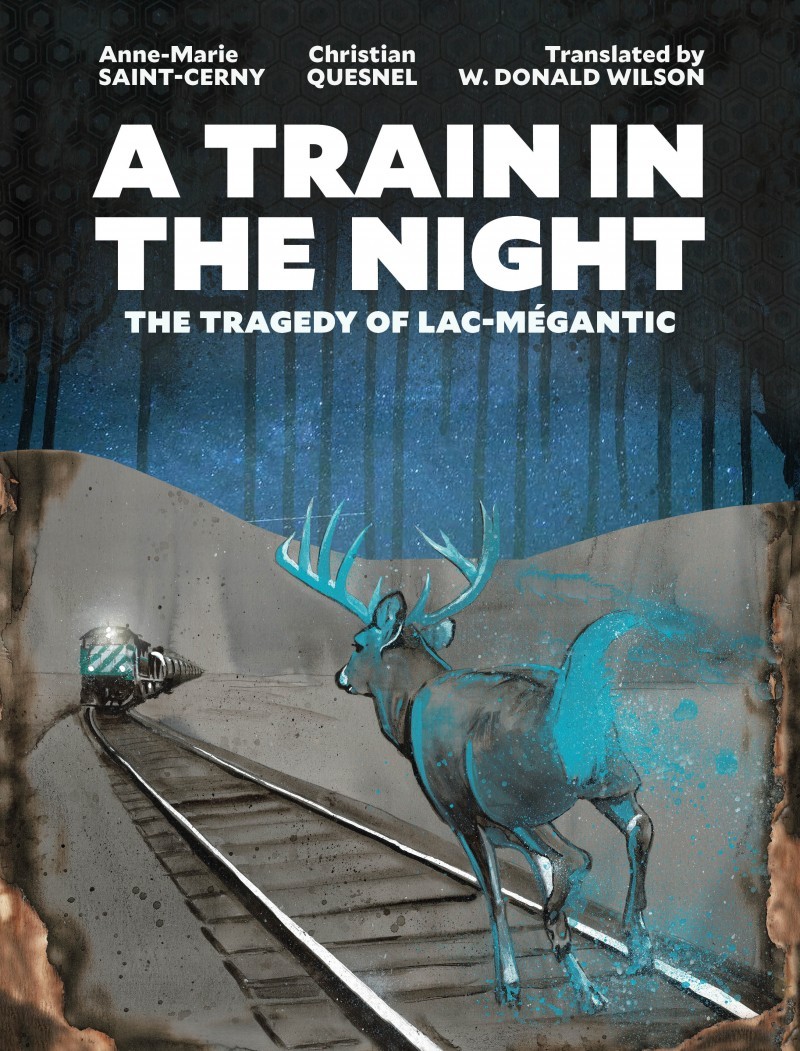 A Train in the Night

The Tragedy of Lac-Mégantic

On a summer night in 2013, a runaway train loaded with explosive oil derailed in the small town of Lac-Mégantic, Quebec. One of the deadliest rail disasters in Canadian history, Lac-Mégantic stands as a haunting narrative of how the powerful profit from collective tragedy.

Who are the real culprits of the disaster that claimed 47 lives? In this vivid, full-colour work of graphic nonfiction, award-winning author Anne-Marie Saint-Cerny and illustrator Christian Quesnel trace the path of the locomotive from the scene of the crime all the way back to cowboy producers of Dakota black gold, Wall Street investors, and politicians in the pocket of the billion-dollar oil and gas industry.

With no national public inquiry launched or meaningful criminal charges laid, the victims of Lac-Mégantic must not become mere statistics, nor the survivors left to the mercy of predatory developers and financial interests. Now the full story of that infamous night and its aftermath live on—and illustrate the true human cost of unfettered capitalism.

“A spectacular contribution to Canadian history, Indigenous history, and eco-history. The level of the art equals the narrative, working together to bring much-needed insight and wisdom to new generations.”

“The creators clearly situate the events at Lac-Mégantic amid larger conversations about Indigenous land rights and extractive industry, displacement and migration, and the need to put people before profits. Though many readers will have some knowledge of the events at Lac-Mégantic, A Train in the Night serves not only as a moving memorial to the many lives undone in that moment, but also as a startling and political call to action, in the hope that the power of this story might prevent another such tragedy in the future.”

“The nuanced, sobering illustrations by Christian Quesnel confer a psychological depth and, at times, a synoptic understanding of Saint-Cerny’s argumentative positions… It was necessary for one especially militant ecologist and writer – namely, Saint-Cerny – to prepare a proper, factual and holistic narration of the facts based on sound data.”

“Why remember horrific tragedy? If we forget, we’re destined to repeat the worst of human error. A Train in the Night is a powerful story that must be told and told again. We know who the culprits are, we recognize the way they work—the question we’re left with is, what do we intend to do about it?”

“A heartbreaking story of loss and the corporate greed that caused a disaster. Christian Quesnel’s beautiful, painterly, raw art lends a poignancy to a shameful history, as does Anne-Marie Saint-Cerny’s spare, dignified use of text.”

– David Lester, illustrator of 1919: A Graphic History of the Winnipeg General Strike

“A Train in the Night demands that we hold those truly responsible for the 2013 Lac-Mégantic railway disaster accountable. Based on extensive historical research, it is a story of heart-wrenching loss, corporate greed, government complicity, and continued impunity. It represents critical history at its creative best.”

“I had read and written about the disaster. I thought I understood it all. Anne-Marie Saint-Cerny and Christian Quesnel have shown me that I did not truly internalize the depth of human depravity. Accurately, vividly, hauntingly, the images and plain text evoke sympathy for the victims and incite anger toward the rapacious profit-maximizers and vapid government officials who nourished their insatiable greed. It is a beautiful book, a militating book.”

“A Train in the Night is a beautiful, heart-wrenching, and highly engaging interrogation of the Lac-Mégantic catastrophe. Refusing to scapegoat the three rail workers involved, this book powerfully connects the mass killing and its dispossessing aftermath to rampant capitalist exploitation, state complicity, gutted workplace regulations, decimation of non-human natures, and global violence. Yet through vivid illustrations and attention to personal experiences, A Train in the Night remains profoundly hopeful for an alternative future.”

– James Wilt, author of Do Androids Dream of Electric Cars? Public Transit in the Age of Google, Uber, and Elon Musk

“Breathtaking artwork foregrounds the human side of the tragedy—the lives lost, the erasure experienced by shocked survivors through the demolition and corporatist redevelopment of their community, and, as usual, the scapegoating of front-line workers by an elite that should bear the ultimate responsibility.”